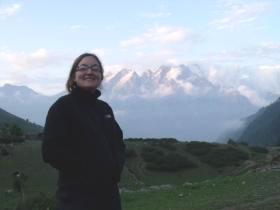 Nicola Starkey didn’t exactly know where her HBGBS training would take her, but never imagined it would be to the Himalayas with a group of super-fit pensioners. Here she talks about the strange destination that horticulture led her to:

“After a year’s course in Garden Design and a period volunteering in a National Trust for Scotland garden I received a place as a HBGBS trainee at the National Botanic Garden of Wales. This was my first experience of working in such an environment after working in offices and libraries. Here I learned how to use mowers and strimmers, care for Mediterranean Climate plants in the beautiful glass dome, and maintain the Order Beds in the Walled Garden.

Not only did I gain practical skills I gained inspiration from the people I worked with. It was here that I met another trainee who introduced me to the world of alpines. I was mesmerised by his stories of his travels to Yunnan and Sikkim to search the remote mountains for these low growing plants. Without an alpine collection at the garden my only contact with these plants that year was at a local Alpine Garden Society (AGS) show where I became fascinated with the tight domes of the cushion plants (Dionysia afghanica) and the perfect petals of the delicate bulbs (Iris ‘Katharine Hodgkin’).

On completing my year at Wales I was taken on as a Royal Horticultural Society trainee and then as a permanent member of staff at RHS Harlow Carr. Working in a brand new Alpine House I had the opportunity to work with and learn about the plants in the collection. Remembering my friend’s stories I jumped at the chance to go on an AGS tour to the Indian Himalaya to look at alpines in their natural habitat.

I spent three weeks, last July, with 20 AGS members, 17 members of local crew, and 20 ponies, camping at night and trekking during the day, reaching nearly 5000m. Everyday brought a new adventure; hiking over boulders, crossing precariously constructed bridges, running across snow before it gave way into the gushing river below, and traipsing through thick gluey mud to avoid a 44 hour traffic jam! We were rewarded for our efforts with vibrant flowering meadows, familiar (Morina longifolia), rare (Paraquilegia anemonoides), and endangered (Arnebia benthamii) species, and all against the backdrop of dramatic snow clad mountain peaks.

I learned so much from seeing alpines in the wild; how different their habits are when not confined to a terracotta pot, how deep the snow really needs to be for insulation, how one side of the valley has a totally different set of growing conditions to the opposite, and I came across exciting new plants I’d never heard of before (Pedicularis bicornuta). I was also inspired by the members of the group, the majority were over 60, the eldest (and fittest!) was 73, their enthusiasm, and botanical knowledge was amazing.

I had not known exactly where my training as a HBGBS would take me, and certainly hadn’t imagined it would be to the Himalayas with a group of super-fit pensioners, but that’s the thing about horticulture, it’s not just about plants, but people and places too.”

Nicola has just been accepted onto the Royal Botanic Gardens, Kew Diploma course. This is a three year course that will equip her for an exciting and diverse career in horticulture – Congratulations!

« Back to all case studies