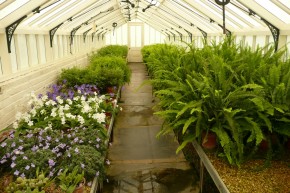 After her 12 month HBGBS placement at the Sir Harold Hillier Gardens, Naomi travelled to New Zealand before gaining a position in a private garden in Buckinghamshire. This is what she has to say about her experiences:

I had always wanted to go to New Zealand and was awarded an RHS Bursary to go and work in NZ for 6 months at Wellington Botanic Garden and Dunedin Botanic Garden – both having large native plant collections. I learned so much – especially about NZ native plants of which in the UK we only know a few. Comparing practises between the NZ gardens and to those in the UK was very interesting. I also spent a lot of time seeing native plant communities in their natural environments – alpine, coastal, sub-tropical forests, temperate forests, etc.

On my return in March 2008, I obtained a gardener position within a team of 9 at a large private garden with formal private fruit, vegetable and flower garden in Buckinghamshire. Within 3 months I was offered the position of cut flower gardener – despite saying in the interview that I preferred shrubs!! I work under an amazing Head Gardener and feel I have learned many new skills including glasshouse work and propagation, which I felt I lacked experience in. To further my horticultural knowledge I attend the Oxford Botanic Garden lectures.

I enjoy living on a country estate and feel very settled. I even have a dog!!”

« Back to all case studies